The year is drawing to a close, and I'm going off on a much-needed holiday next week. This seems like a good time to look back at the past twelve months!

I can't believe that shipped

2018 was the year of foundational work. As far as "work work" is concerned, I spent the first 9 months finishing up my largest project ever, the itch v25 rewrite. 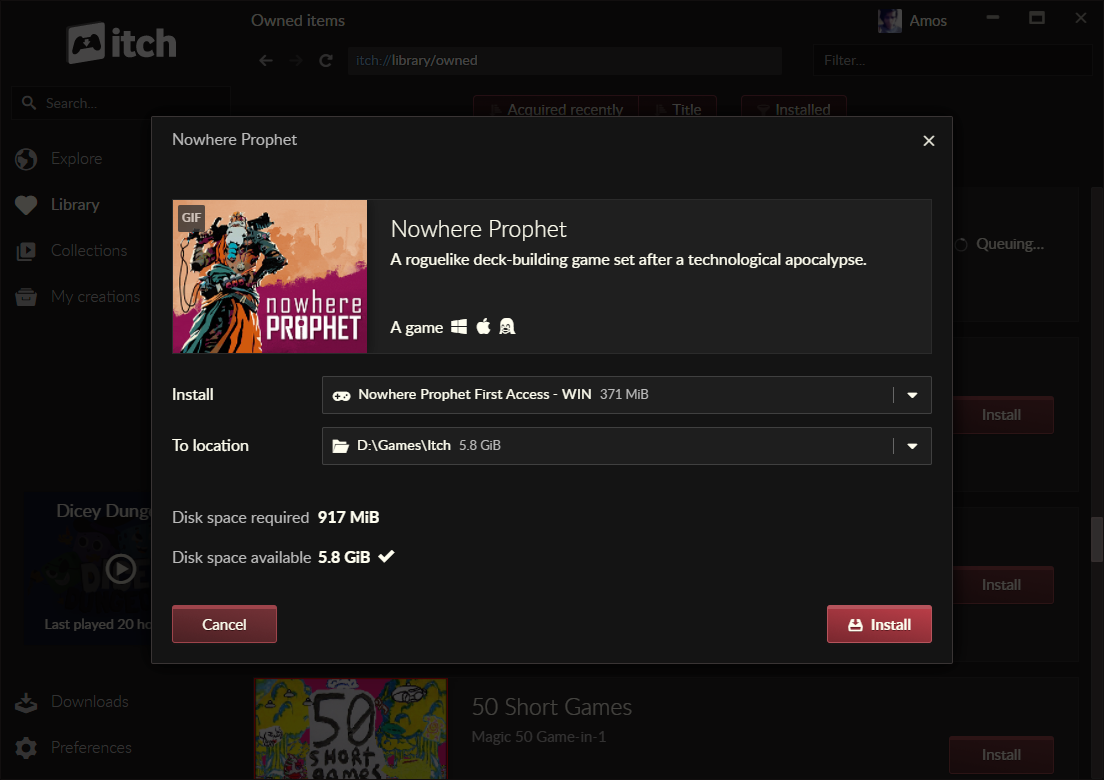 At several points during this 1.5-year effort, I thought I was "almost" finished. The most significant "almost finished" moment was when finally, everything was working, and I was describing it to Leaf - how butler was now handling all the downloads, install, upgrade, configure, prereqs, launch, and uninstall operations.

And Leaf went "so the app still makes its own API requests for login, owned keys and collections?". And I went yeah. And he went "Why?". And I had no good reason why, so I went back to work

I'm happy I went back to work, because while I was moving the last API bits over to butler, I found a ton of other issues, and had time to fix most of them.

While I was hard at work on the app, I was happy to get closer to some of my coworkers. Jesus was instrumental in keeping my sanity levels in check, and he helped out on many occasions. Even if it wasn't a lot of code, just discussing a problem, and reviewing potential solutions together, was a huge help. He also pushed me through the eventual app release - I was in full freak-out mode for over a week at this point, and Jesus said: "it'll be fine". And, lo and behold, it was. Thanks so much, buddy!

In 2018, I also got to know Spencer better. Saying we come from different backgrounds is an understatement, but we share a love for games and their creators, so it was easy to go from there. Apart from reaching out to developers, helping them get on board, putting together bundles for a good cause, etc., Spencer has been making sure our blog is teeming with game recommendations, feature announcements, and developer interviews.

One fun thing about work is that being in France, I'm 9 hours ahead (GMT+1) of Leaf & Spencer (GMT-8). That, combined with the amount of work we all have to do, and my natural aversion for meetings, contributed to a sentiment of isolation. We finally got our collective shit together in the second half of 2018 and set up bi-monthly video calls.

This had more than one positive effect. We ended up talking to each other more, even outside those calls. It became easier to tell how everybody felt about current priorities, what they were struggling with (regular stand-ups had mostly been about the "what" so far, not the "why" and "how").

From an external perspective, my hope is that, over time, the focus of itch.io becomes clearer to developers and players on our platform. Near the end of 2018, it certainly transitioned from "everyone has things they need to finish, it'll take the time it takes" to "let's all discuss where to go from there". 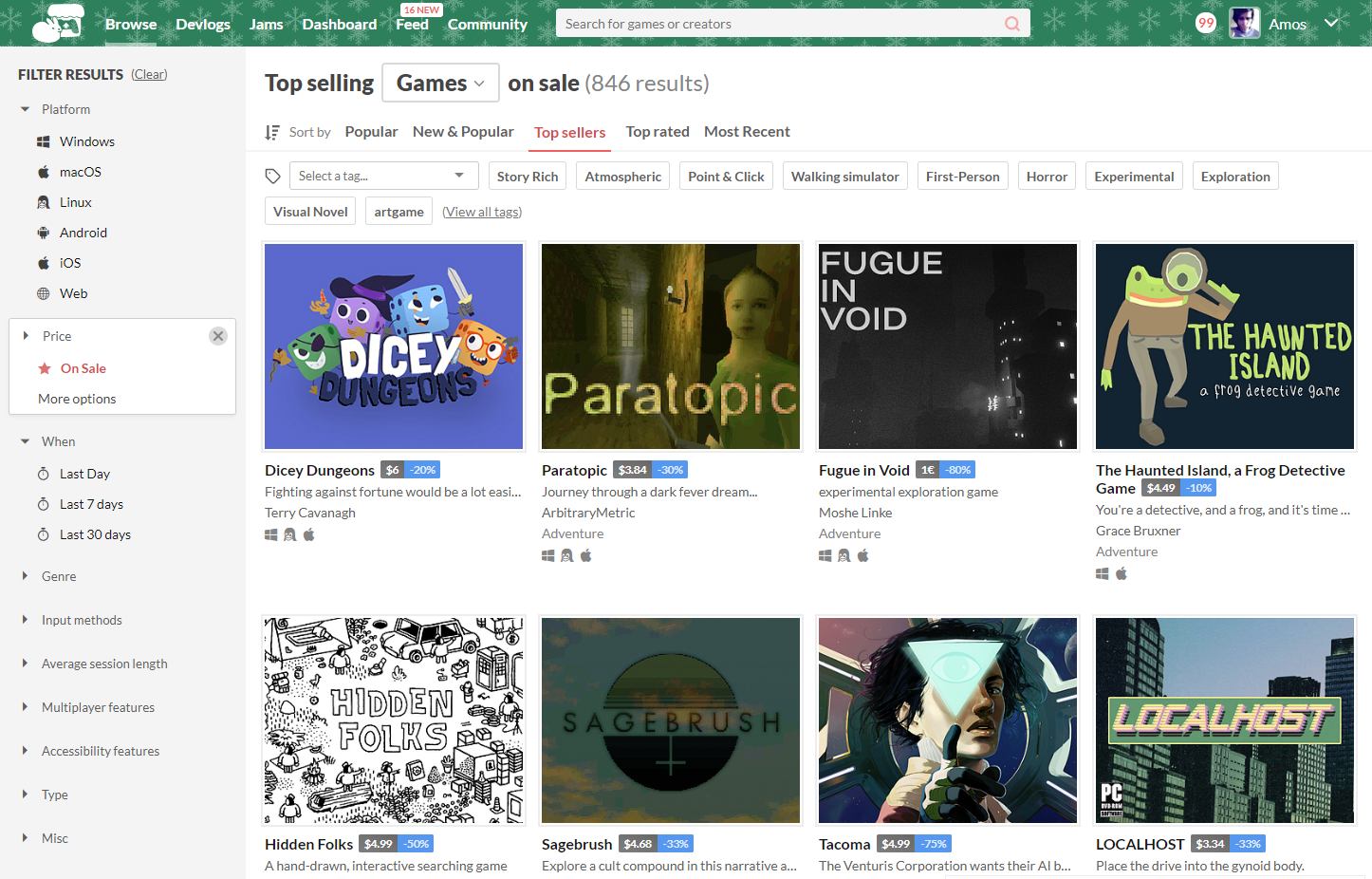 Hence, foundational work - in that timeframe, we strengthened working relationships with each other, made sure our payments system, browse pages, devlogs infrastructure, community framework, desktop app, and many more were solid. Our ongoing 2018 Winter sales are the most successful one so far - a good example of the result of better cohesion.

The perception of itch.io is that we focus entirely on creators - giving them the best possible tools to develop, promote, sell, distribute, and update games, assets, comics, books, and more. This is true to a certain degree, however, my thinking on that has started to evolve in 2018.

We're always collecting feedback from our customers (whether they speak as creators or as players), and are constantly keeping an eye on various actors in the market. However, the bar for any change is rather high - not only do we provide many services to a lot of creators (given our team size, and the cut we ask for), but we always consider whether any potential changes align with our values, whether they'll be sustainable, whether they set a precedent, what the long-term consequences will be, etc. 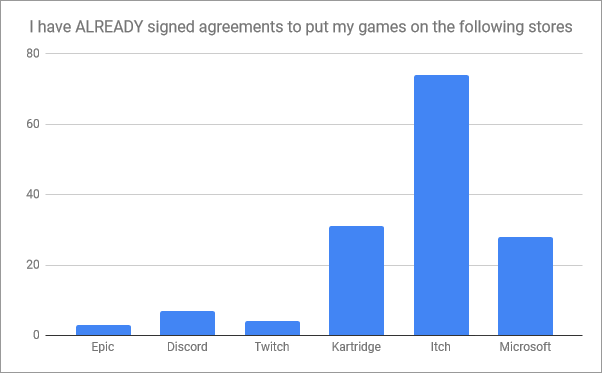 Creators seem rather happy with the toolset we're providing right now (save for the occasional "wouldn't it be great if..." - which cost usually ranges from a weekend project to a 6-month team effort), and my thinking going into 2019 is that focusing more explicitly on our other customers — players — is overdue.

Not that we haven't done it up until now. There's already plenty to love on itch.io as a player, including my baby, the itch.io desktop app - which is strongly player-focused. But there's a lot more we could do, and it would benefit creators as well.

Does that align with our values? I think it does. We want to keep providing the same great tools for free content - but although we run a tight ship, doing so has operational costs. Taking better care of paying customers will result in a growing user base, which benefits paid and free content alike. It will also, no doubt, result in superior tools overall.

We don't reserve features to "premium developers". When we first developed butler, the desktop app, and exclusive rewards for Overland's first access, everyone got access to those. 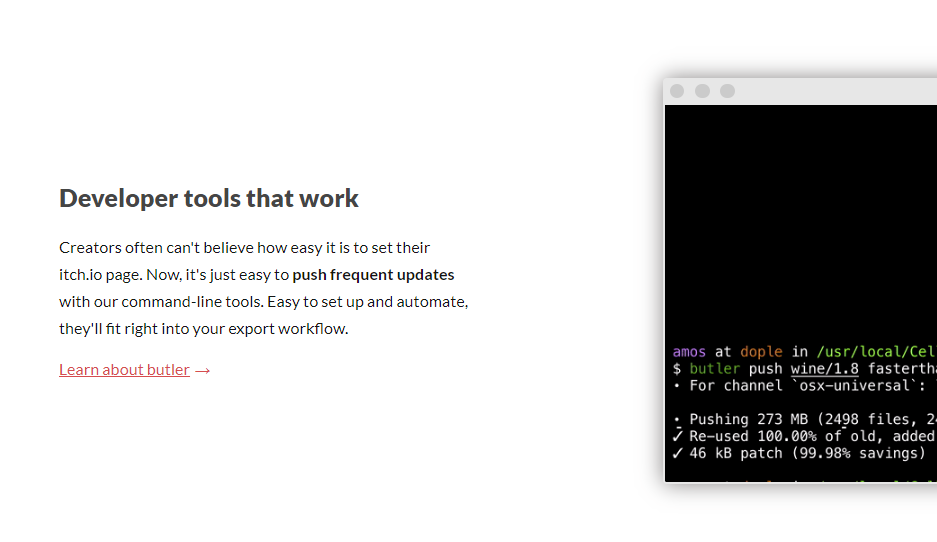 Supporting local currencies, more payment methods, regional pricing, internationalization, etc., are all on my 2019 roadmap, and they will help ensure that itch.io remains sustainable in the future, and that we can keep welcoming all kinds of creators.

I've always been reserved about work that wasn't a direct continuation of what we've done so far, out of fear that we would "lose our way", but as I've learned more about how the competition has operated these last few years, those concerns have been put to ease.

Giving a great experience to buyers, and giving them incentives to stick around, is not questionable. There is a clear line between that and losing our way, and seeing actual shady behavior made that very, very obvious to me.

Whereas in 2018, we made sure we covered our bases, I hope 2019 will be a year of growth. I got asked numerous times what my thoughts were on new entrants, and, although this is not the topic of this post, I'll try to address a few things here.

Amazon — a retail giant — acquired Twitch and launched a games store back in April 2017, only to shut it down in November 2018. Desura was bought three times over. Tencent has been trying to enter the US market, via its significant investments in both Epic and Discord. There's more.

Here's my main point: real growth follows the market. You can pay for exclusives, and you can do giveaways, but these are not enough to become sustainable. Large cash injections only make it harder to measure how well you're doing. It's like turning on the AC to combat climate change - sure, it'll be cooler in your office, for now. But in the long-term, it makes things worse.

As far as I know, we don't have any direct competitors: small, bootstrapped companies, that are careful about their costs and do their best to serve customers' long-term interests. The closest I can think of are Bandcamp and Gumroad, both of which took funding. Kongregate was owned by GameStop, now Modern Times Group. GOG is a subsidiary of CD Projekt. Humble sold to Ziff Davis in 2017. The list goes on. 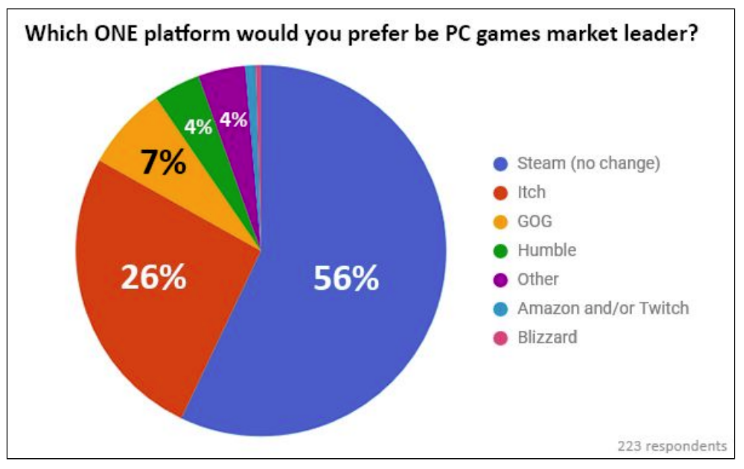 Even though userbases overlap between these companies and us, nobody is doing quite the same thing we are, in quite the same way. This is, in itself, not enough either. Some aspects of the platform are superior to competitors several orders of magnitude larger than us. Some aspects are lacking, and we will continue to work to address those.

Although I find myself wishing, at times, that we had more immediate resources available to tackle a certain class of problems, I'm confident we will progressively get there, by continuing to roll out improvements that we think will benefit everyone on the platform - in an order and at a rhythm that makes sense given our structure. 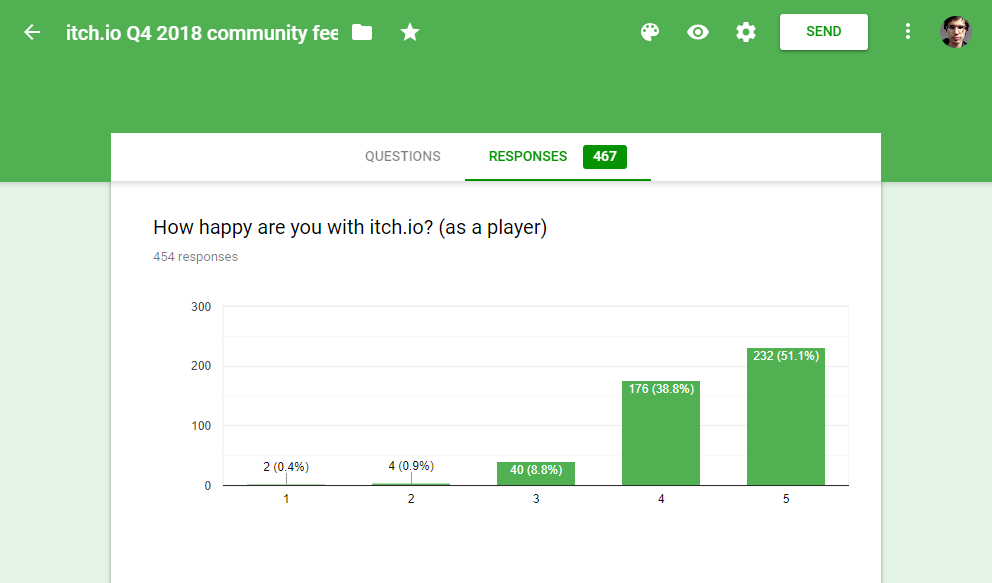 Near the end of 2018, I started reaching out more directly and more actively to creators and players using itch.io. Expect a lot more of that going into 2019. I'm really looking forward to making our platform — your platform — grow, informed by direct user feedback and closely working together with individual creators and consumer groups.

I already mentioned improving payments, especially for non-US markets. I've also been starting to take a closer look at our design and usability issues, and what we can do to solve them. At the time of this writing, there are over 140'000 games on itch.io. Letting creators have a larger audience, by helping them with visibility and providing players with a clear and positive experience, is among our top priorities for the new year. 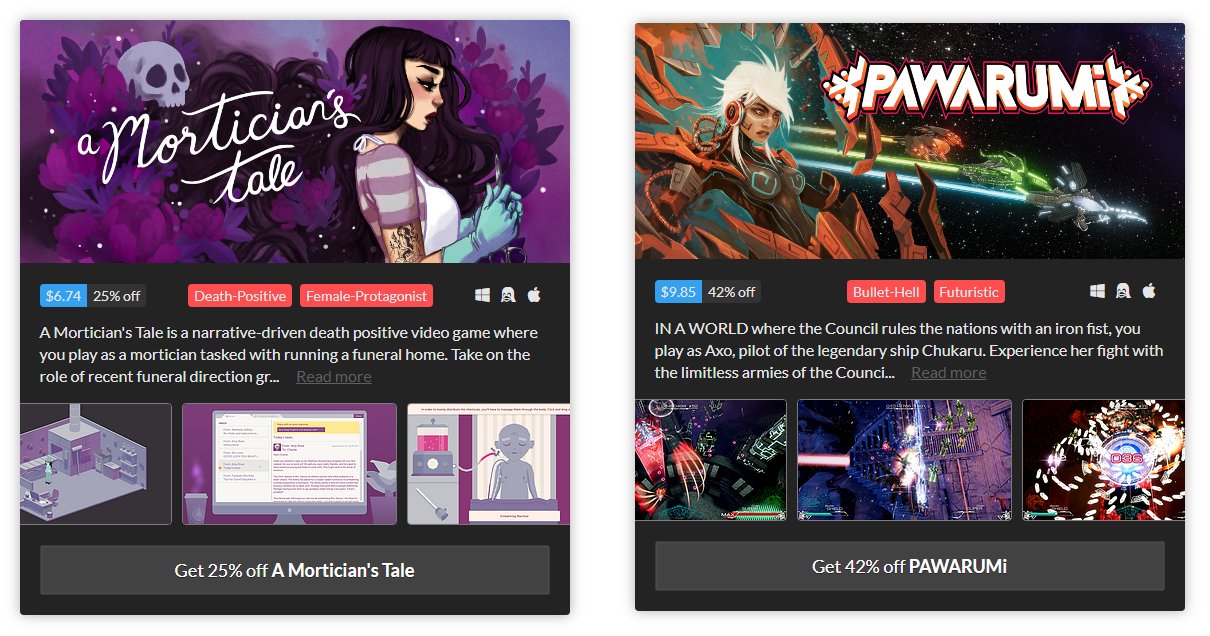 I think 2018 has been a rough year for everyone - that certainly holds true for me. The first... three quarters of the year haven't been the best in terms of work-life balance. I'm pretty open about my struggle with depression, but this year's challenge was mostly about anxiety.

I documented the worst of it, and ever since, it's been a slow, uphill battle. Nevertheless, I feel a lot better now. I've started driving for pleasure again. It's easier for me to let go and say yes to things without thinking of all the potential downsides. I'm connecting with people again, in a way I haven't done in a while.

This section feels a little out of place in this post, considering what I've covered already, but I wanted to include it anyway. I can't do my best work if I'm not taking care of myself. I'd like to thank all the folks at home, at work, and on social media for sticking with me despite the gloomier days.

In July, I wrote a piece for the two-year anniversary of the loss of a dear friend.

It's important for me to be open about mental health issues, and health in general, because I want folks to know that it happens to everyone, and that it can be, maybe not beat, but managed. We're all flawed in some ways, the best we can do is be patient, compassionate, and look out for each other.

In 2019, I'd like to avoid less and address more - while making sure the necessary boundaries are enforced. It's a tall ask, but I'd encourage all of you to do the same!

With that, all that's left is to wish all of you Happy Holidays. Take care of one another. I'll see you in the new year for hopefully more of the same, and some new things as well!

Are you ever confronted with a problem and then think to yourself "wait a minute, I know how to code?" — that's exactly what happened there.

You can watch more videos over there

Looking for the homepage?
Another article: Remote development with Rust on fly.io