Thoughts on going down the network stack

I have no shortage of ongoing writing projects - I still need to edit and publish the final parts of making our own executable packer, and I've recently announced I was working on a Rust book/series. Those are still both on the table.

Buuut... I'm also looking at other things. My best writing happens when I'm learning about something at the same time I'm writing about it. So for example, the Rust book is a bit harder to write, because I'm mostly trying to distill knowledge I've already absorbed (for the most part).

On the other hand, the ELF (executable packer) series was great for that - I knew a little about ELF, enough to think something interesting could be done with it, but not enough to send me into analysis paralysis - I didn't have to figure out in which order to tackle various questions, because I was just hunting down the answers to my own questions, as they came up.

Of course the downside of working this way is I'm in a constant state of not being qualified enough to write about whatever I'm writing about. But that's where more knowledgeable readers come in with helpful feedback!

So, in the spirit of writing about things I don't yet understand - I've been looking at embedded hardware recently. I just see a lot of "Rust on embedded" tweets going around, and tiny stuff has that cool factor, I just knew at some point I'd buy a board and try to figure out something fun to do with it.

So I did! I bought the BBC micro:bit.

Why that one? Well, it was reasonably-priced, and could ship to France quickly enough (Covid-19 means shipping times are way longer now). Also, I've seen some people run Rust code on it.

While I was thinking of things to do with this chip (besides blinking its LEDs furiously), my eye was caught by "2.4 Ghz radio".

How cool would that be? I feel like projects are always a lot more fun if they can hook into existing systems - just like the our ELF dynamic loader can run programs built with GCC, or how our userland ICMP implementation can ping real-world servers on the internet.

So immediately my instinct told me this was a very dumb idea. But I like very dumb ideas! I figured at some point, something would prevent me from, somehow, programming an nRF51 so it does 802.11 instead of Bluetooth Low Energy.

I figured... the radio would probably be too weak. Bluetooth Low Energy is for short-distance communications, it uses a lot less energy than Wi-Fi. But maybe.. if I stick my micro:bit really close to an access point...

I also figured the ARM Cortex-M0 CPU would probably be too slow. From my initial research on 802.11, the time you have to process and reply to a given message is short (in the neighborhood of 10μs).

But then, after talking to a few more folks involved with wireless networking at various levels, I stumbled upon the actual stopping point: Bluetooth LE and 802.11 simply use different modulation schemes.

Well, as a software engineer, I'm mostly thinking of data as bytes - which usually end up being a collection of 8 bits. And I was naively thinking, okay, the radio module just lets us read and write bits at a certain rate.

And to a certain extent, I was right! I just sorta, kinda, forgot, that when the data escapes through the antenna, it does so in analog form - as a wave.

If you've ever wondered what the difference between "AM" and "FM" radio is, this will be familiar to you.

In AM, you mess with the amplitude of the wave - how far up and down it goes: 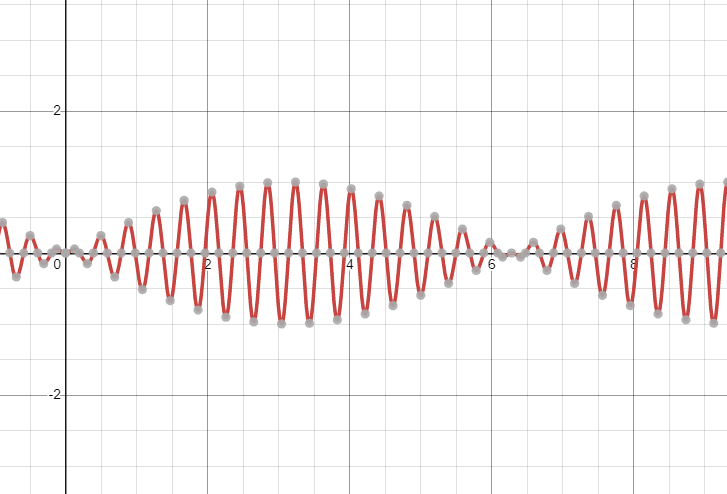 In FM, you mess with the frequency of the wave - how often/how fast it goes up and down: 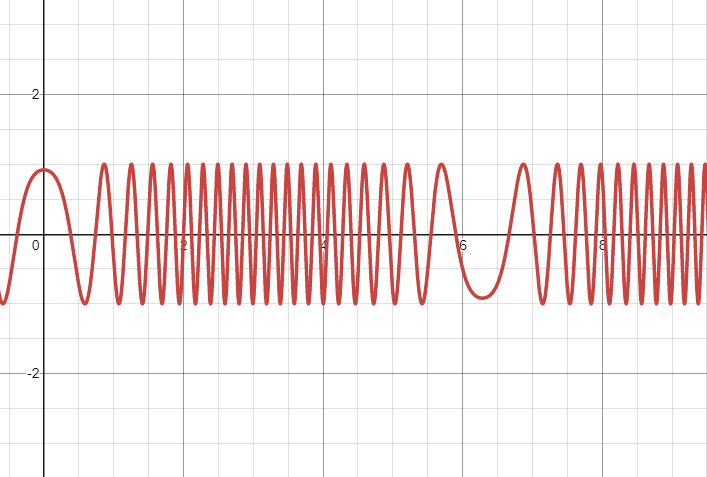 Bluetooth uses GFSK (Gaussian Frequency Shift-Keying) - which means it uses different frequencies to send a 0 or a 1. I'm still not crystal clear on the Gaussian filter part, but Wikipedia tells me it makes the transition smoother.

802.11g, however, in the low bitrate modes I was looking at, is using BPSK (Binary Phase Shift Keying), which changes not the frequency, not the amplitude, but the phase of the wave: 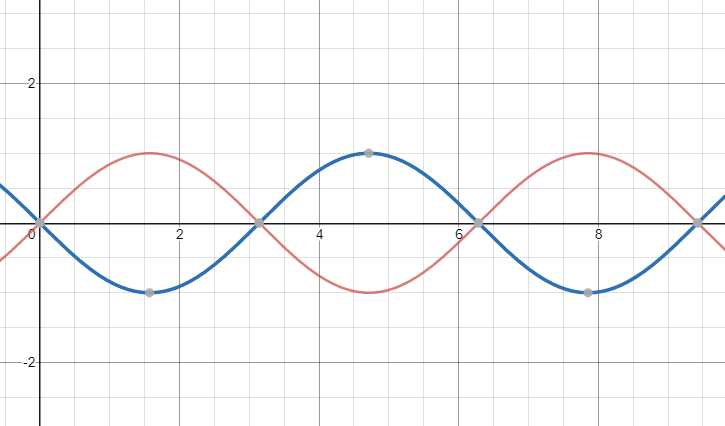 What's the problem then? An nRF51 radio should still be able to do that, right?

Well, yes and no. Even though part of the Bluetooth LE stack is implemented in software, running on the nRF51's CPU (and various dedicated chips), the modulation and demodulation is definitely not done in software.

Further research indicated that it would be, in theory, possible to do your own modulation/demodulation using a Field-Programmable Gate Array (FPGA).

Some additional hardware is required besides the FPGA itself, though, and programming an FPGA is not as comfy as writing ARM assembly. So, you know, for a first embedded hardware project, it seems a tiny bit out of reach.

Not to mention that to debug any of it, you'd need very expensive measuring hardware. Even a good oscilloscope will set you back quite a bit.

But I'm not discouraged. First off, I'm going to find something else to do on the micro:bit. It has a LED array I'm sure we can do fun things with.

And second, I'm really curious about modulation schemes now. So I'm thinking, if we don't have hardware... we can just simulate all of it.

Not accurately, of course. I don't want to get into actually simulating waves in a physical spaces, and having them bounce around, and influence each other.. but a bit of random noise added, and some artificial signal loss would do just fine...

And once we have modulation/demodulation in software, who knows what else we can build on top of it! And it would be a series anyone can follow along.

So I'm excited! Cautiously so. I really want to finish the other stuff before fully committing to this, but I think some signal processing is not outside the scope of my writing project.

Well, that's it for now. We'll see where this goes. I was a bit worried going into this new territory alone, but I've already gotten the opportunity to ask my dumb questions to a few folks, and I'm sure as time goes on, other opportunities will present themselves.

After all, the best way to get the right answer on the internet is to post the wrong answer!

Looking for the homepage?
Another article: Peeking inside a Rust enum