This article is part 5 of the series Making our own ping:

Previously (Part 4)
Designing and implementing a safer API on top of LoadLibrary
Next up (Part 6)
The builder pattern, and a macro that keeps FFI code DRY

We've just spent a lot of time abstracting over LoadLibrary, but we still have all the gory details of the Win32 ICMP API straight in our main.rs file! That won't do.

This time will be much quicker, since we already learned about carefully designing an API, hiding the low-level bits and so on.

Let's add an icmp module to our program. Actually, we've been dealing with an IPAddr all this time, it also sounds like it could use its own package:

Our ipv4 module will be short and sweet. In src/ipv4.rs:

Now we can just change mentions of IPAddr to ipv4::Addr.

Onto the icmp module, we'll actually want two sources files. One will expose our public interface, and declare its own private module to further hide the Win32 bits.

Note that we had to make the structs and their members pub, because we're defining them in crate::icmp::icmp_sys but we're going to be using them from another module, crate::icmp. Without pub they'd be private to the current module and that's it.

You may remember from the previous parts that we need an “ICMP handle” to use the Win32 ICMP API, so let's start by exposing that:

Good! Now we could do something like that in src/icmp/mod.rs:

However, there's several problems with that approach

First problem: we left IcmpCreateFile unimplemented. We know we're not going to be implementing it ourselves, it's actually provided by IPHLPAPI.dll.

But we also know we can't just do:

..because then our program won't link. We've been using LoadLibrary to dynamically load IPHLPAPI.dll (as the Microsoft docs recommend!), we haven't been linking against it.

..and it would work. But it would leak handles (we never close IPHLPAPI.dll).

Also, it would open the DLL and look up the procedure every time we call IcmpCreateFile. So that's not going to be a viable long-term strategy.

But, for now, let's roll with it - just so we can get our crate::icmp module up and running. We'll add IcmpSendEcho too:

Whoa. Okay, yeah, we're definitely going to need to come back to that.

But for now, we've got everything we want, I think! Let's move on to the design of the crate::icmp module.

We want our icmp API to be simple to use, something like:

So let's build that!

This is pretty much the simplest thing we can do that still works.

A few things to note:

But… it seems to work! 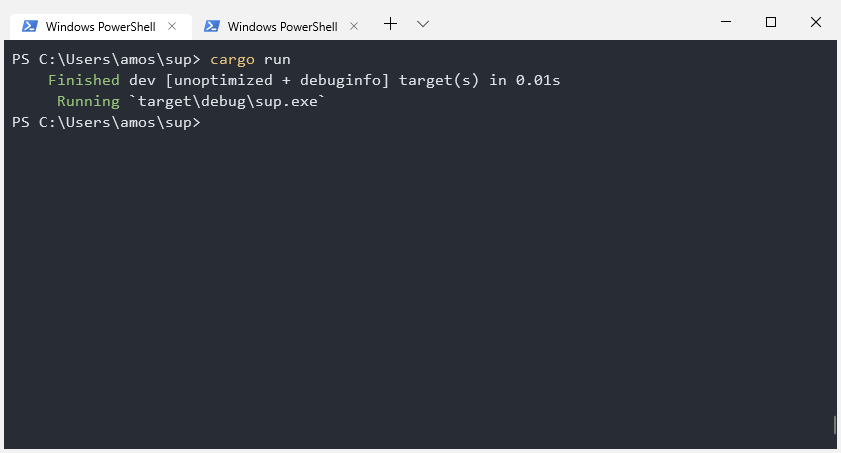 Well, with no output it's always hard to convince oneself that it works.

Let's try with another address just to make sure: 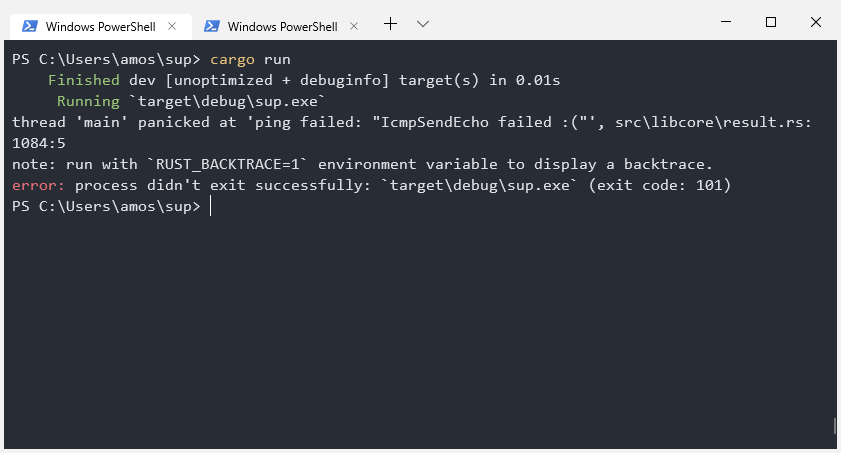 Do you like the fancy terminal in those screenshots?

That's the new Windows Terminal, which now has beta builds available on the Windows Store.

It turns out Amos was too lazy to build it from source so he's only gotten around to it now.

Also, the theme is “One Half Dark”, and the font is “Consolas”.

Although we have a lot to clean up underneath the surface, let's spend some time making sup (our version of ping) more user-friendly.

So far we've been hard-coding IP addresses - it's time for that to change.

We can use the std::env package to retrieve command-line arguments: 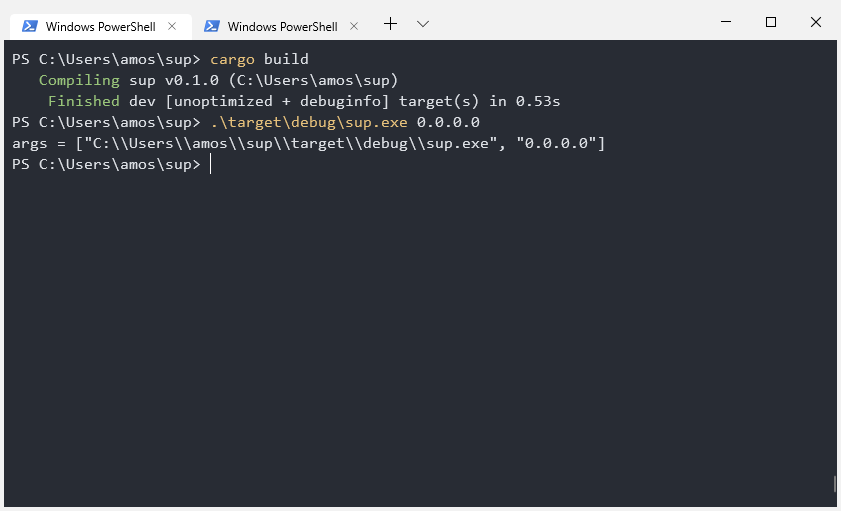 For starters, we'll only take one argument - the IP address of the host to ping.

What's happening here? Well, std::env::args() returns an iterator, so we can just:

Let's delegate that job to the ipv4 package.

How about an ipv4::Addr::parse() method?

Okay, well, it's certainly easy to use:

But.. about that function signature: do we really need to take a String?

Remember, String is an owned type, so by taking a parameter of type String, we take ownership of it. Which means we can't re-use dest after:

We never actually change the argument to ipv4::Addr::parse. We don't hang on to it either. We just need to.. borrow it (immutably) for a hot minute.

So we could take an &str instead!

We don't have to worry about the lifetime of s (see Declarative memory management for an intro to lifetimes).

But, we do get a new compile error:

Well, fair - we can fix that by passing &arg instead:

…but wouldn't it be nice to have our parse function accept both &str and String at the same time?

The AsRef trait lets us do that:

Now, we can call ipv4::Addr::parse with either a &str or a String - or with any type that implements AsRef<str>, for that matter.

However, if we pass a String, we still pass ownership along with the string. If we want to re-use arg after, we must pass &arg. In this case, we don't really care, so we can just pass arg - for convenience!

So! Parsing a string into an IPv4 address.

Well, we know we're going to have 4 parts, separated by dots. So let's split that string up:

So far, so good! We had to call .as_ref() to get an actual &str - that's what taking an AsRef<str> guarantees we can do.

Next, we need to take 4 parts, convert them to u8 values, and return them as an ipv4::Addr.

Well, we've just used iterators before, so we know we can use next()!

So we have to face the hard reality that parse can fail - not all strings are valid IPv4 addresses.

By doing that, the borrow checker woke up and told us we needed tokens to be mutable - it is an iterator, and next() changes its internal state after all.

dbg! is simply a macro that prints expressions, first literally, and also their value. It also shows the source file location of where we asked for a debug print: 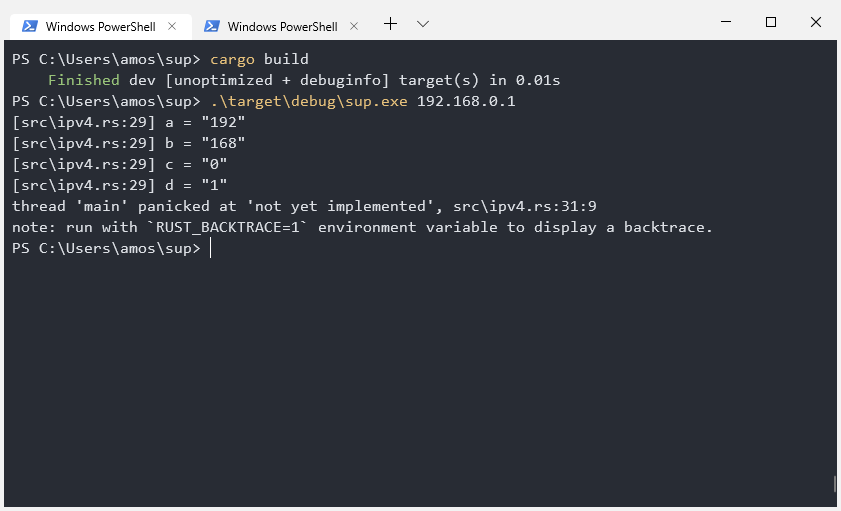 So far, so good - but we need u8 items, not &str items. Luckily, u8 implements the FromStr trait, so we can just do this:

Uh oh this is starting to get unwieldy. But it does work: 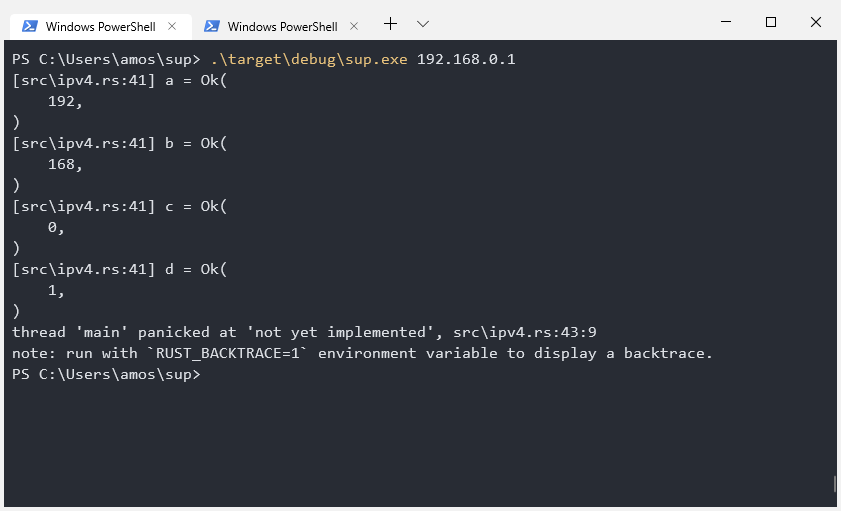 Note that u8's implementation of FromStr might not exactly be what we want.

It might accept, for example, hexadecimal notation like 0x13. 0x13.0.0.1 isn't really format in which we expect IP addresses.

But there's many ways to “parse a string into an int”, and, if we were writing production software, we should should make sure the standard FromStr implementation meets our needs.

If we didn't, we might silently accept bad input, causing hard-to-diagnose problems.

Well, it's complaining about From, maybe we can implement From?

Boom! Now we can implicitly convert between std::num::ParseIntError and crate::ipv4::ParseAddrError.

But our parse function is still quite long and repetitive. Here are some ideas to fix it.

We could use a closure and call it repeatedly:

That version works quite well: 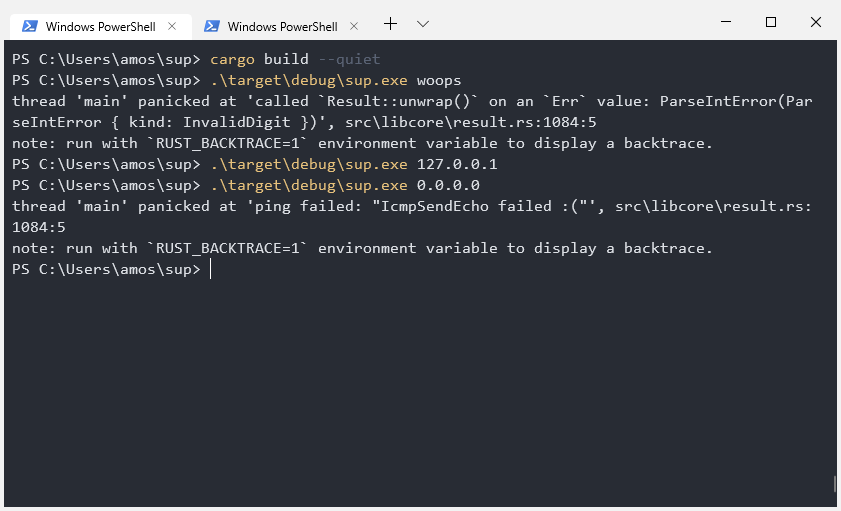 Although we're still calling f four times, which I'm not a fan of.

I like this one better, so we'll keep it.

While we implemented ipv4::Addr::parse, we discovered something: there is a FromStr trait in the Rust standard library.

Why not implement that trait for Addr instead?

Now, we can change our main function from this:

And if we let our main function return a Result, we can reduce it further to this:

And here we have those multiple ? sigils that confuse Rust newcomers - but they each have a purpose on the second-to-last line. There's two operations, both of which can fail: converting the argument to a string, and then performing a ping.

Of course, for that to work, we need to make ParseAddrError implement std::error::Error, which in turns requires it to implement std::fmt::Display, so let's do that right now:

And there you have it!

Rust's visibility system is fine-grained enough for us to hide implementation details however we choose to.

std::env::args() returns the arguments passed to a program as an iterator. One may skip an iterator's items, ask for the next item, or collect the whole iterator into a type like Vec<T>.

The FromStr trait is implemented by a variety of primitive types. Implementing it for custom types is easy, and works great with command-line argument parsing.

The AsRef trait allows one to take both a &str and String. Or, both a Path and a PathBuf. This applies to many other types. See also the Borrow trait.

The dbg!() macro is very useful for quick and dirty “printf debugging”.

When the rust compiler needs a little help inferring types, closures can be annotated with argument types and a return type.

This article is part 5 of the series Making our own ping:

Previously (Part 4)
Designing and implementing a safer API on top of LoadLibrary
Next up (Part 6)
The builder pattern, and a macro that keeps FFI code DRY